City by the Sea: Our Heritage

City by the Sea

Palacios is located in Matagorda County, nestled along the Tres Palacios Bay, an inland bay of Matagorda Bay, on the southern coast of Texas. Known as City by the Sea, it is approximately 110 miles southwest from Houston and around 110 miles northeast of Corpus Christi.

There is a legend that a Spanish ship was wrecked off the coast near Palacios. The sailors saw a mirage of three palaces and swam toward the shore where the palaces seemed to be. The palaces disappeared, but the name, Tres Palacios (“Three Palaces”), did not. Today, however, the name is usually pronounced puh-LASH-us.

Matagorda County was organized in 1837 when Texas became a Republic. The area was ranch land and continued as such until cotton began to be farmed. At the turn of the century, land developers moved into South Texas touting the climate, the access to navigable streams and the Gulf of Mexico, the land, and the network railroads available.

A real estate agent named W. C. Moore and others formed a corporation called The Texas Rice Development Company and developed an area in West Matagorda County, 19,400 acres, on Tres Palacios Bay. The area, called Bull Pasture, had been part of the famous Shanghai Pierce Ranch. A town was laid out at Hamilton Point in 1902 and named Tres Palacios (the Tres was later dropped).

The population grew quickly. In 1904 construction of a “Pleasure Pavilion” was started on the central waterfront. It featured a two-story open-air central structure with two large wings on either side and offered entertainments ranging from dancing and skating to basketball games. Numerous buildings went up around this time. The City of Palacios was incorporated in 1909, and the Chamber of Commerce was founded in 1910. 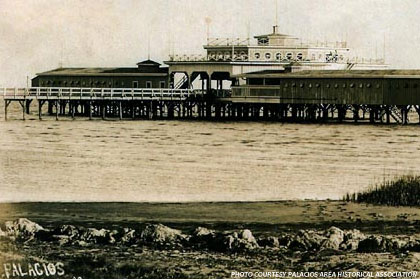 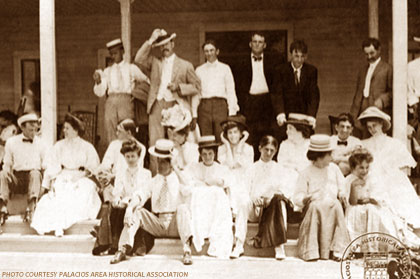 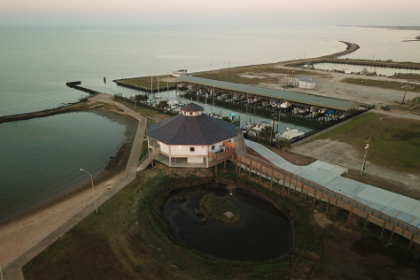 Palacios continued to grow throughout the 1910s and 1920s. Camp Hulen (originally Camp Palacios) was founded in 1925-26 as a summer training camp for the 36th Infantry of the Texas National Guard. It was leased to the U.S. War Department in 1940 and became a training facility for anti-aircraft artillery, housing nearly 15,000 personnel at its peak, as well as a number of German war prisoners. With its large military population, Palacios played host to visiting stars such as Rita Hayworth and Glen Miller. After World War II, Camp Hulen was closed and the population of Palacios declined.

Hurricane Carla hit in 1961, causing severe damage to the town and destroying the old pavilion. Since that time, Palacios has begun to grow again, with the formation of a vibrant Vietnamese immigrant community in the 1970s and 80s, as well as people from all over America discovering the beauty and tranquility of this special place. A new pavilion was constructed in 1991, symbolizing the connection with the past and a bright outlook for the future. The City by the Sea celebrated its centennial in 2009 with a number of major events and festivities. 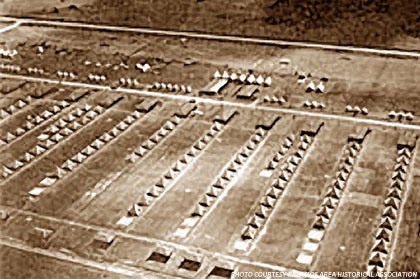 Camp Palacios was established in 1925 as a summer camp for the 36th Infantry of the Texas National Guard. In World War II it was leased to the U.S. War Department and became an anti-aircraft artillery training facility. At its peak capacity, it was home to nearly 15,000 service members, as well as a number of German prisoners of war.

Palacios is home to around 400 vessels, one of the largest shrimping fleets in the United States. To learn more about the shrimping industry in Palacios, check out the pages linked below.  They were created in 2000 when the Palacios Chamber of Commerce honored the local shrimping and fishing industry.  Many of the shrimping families wrote histories of their family in the community and a booklet was available at the banquet.  The links below feature their stories.

The First Shrimping Family in Palacios 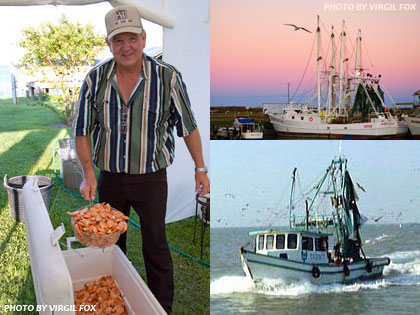 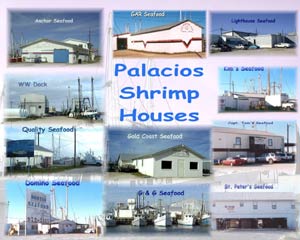 Nature
Recreation
History
Around Town
Our Heritage
Share This