La Salle’s Expedition to Louisiana in 1684, painted in 1844 by Jean Antoine Théodore de Gudin. La Belle is on the left.

Home of the Texas Historical Commission Shipwreck Project, 1996. Palacios is home to one of the most exciting archeological discoveries in Texas history. The ship the “Belle,” belonging to French explorer Rene Robert Cavalier, Sieur de la Salle, which sunk in 1686, was excavated from Sept. 1996 to April 1997, and all of the artifacts as well as the hull of the ship, were brought into the headquarters in Palacios before being taken to Texas A&M for conservation. Even though the excavation has finished, the excitement lives on. Researchers continue to study the artifacts, and a replica of the “Belle”, “La Petite Belle” will soon become a part of the 7 county LaSalle Odyssey. The Texas Historical Commission has a detailed history of the La Salle shipwreck excavation, and the City by the Sea Museum in Palacios has an excellent video presentation detailing the excavation.

“Composite image from three photographs looking down at the excavated wooden hull remains of the Belle shipwreck, excavated by the Texas Historical Commission in 1995. The photos were taken from the roof of the cofferdam which surrounded the ship and kept it in a semi-dry environment. All artifacts had been recovered from inside the hull before these photographs were taken. The photographer was an archaeologist working on the project.” Wikipedia

“Bronze cannon and other artifacts exposed in the lowermost part of the hull remains as seen during the final stages of excavation in February 1997. This photograph was taken in February 1997 at the site of the Belle shipwreck.” Wikipedia 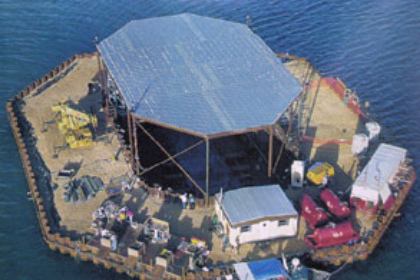 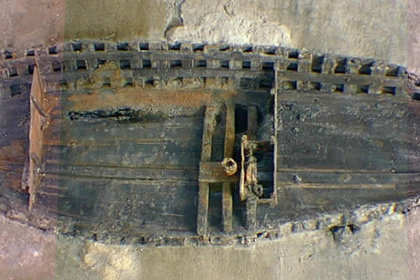 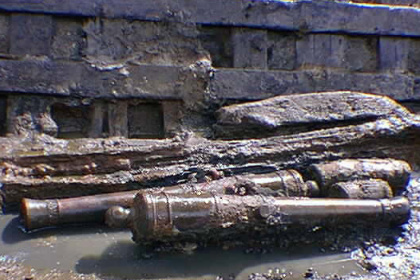 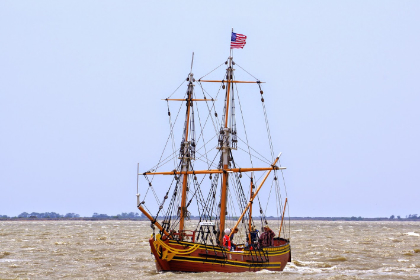 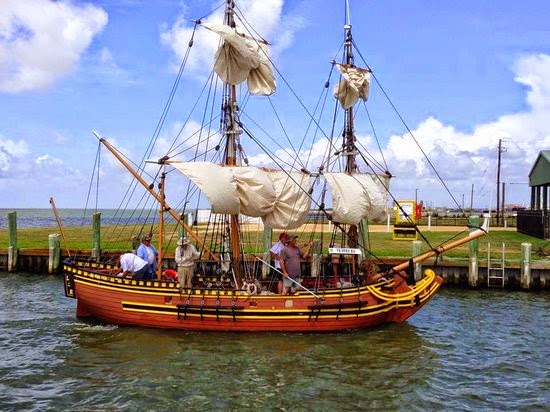 City By the Sea Museum

Step into the past at the City by the Sea Museum, operated by the Palacios Area Historical Association out of the Hill Building, a local landmark dating back to 1910. Displays include a detailed history of the community as well as an excellent video of the La Belle excavation. 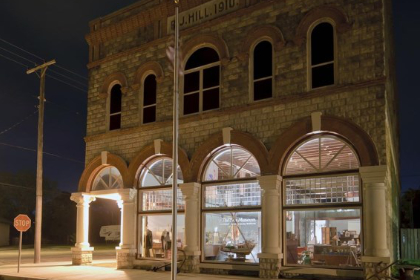 Palacios has several historical markers within the city limits. These include historical homes, churches, schools, a cemetery, a WWII Texas National Guard camp along with a hotel and Baptist Encampment. 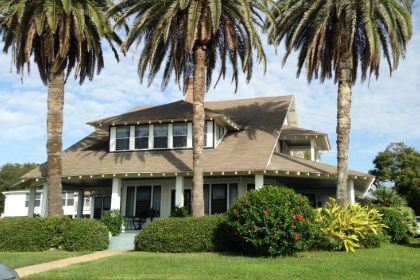 This home at 506 South Bay Boulevard was built in 1910, an example of a unique design by architect Winn Wood. Though many craftsmen bungalows were built during the time period, the structure features unusual elements for the style such as a veranda and side-gabled roof. Guests at the home included such notables as Texas Governor Pat Neff.

Built in 1910, this local landmark was originally a mercantile and later belonged to a number of different businesses until it was purchased in 1986 by the Palacios Area Historical Association. Extensive renovations were made possible through the generous support of community donations, and today it is the site of the City by the Sea Museum.

The first pavilion was built on the Palacios bayfront in 1904. It was a 2-story structure called the Pleasure Pier and had boat docks and bathhouses extending down the pier.  It offered swimming, boating, dancing, skating, and basketball parties.  It received hurricane damage in 1914, 1915 and 1934. A new pavilion, “The Round House,” was dedicated late in 1935 and was the site for many dances and included some famous “Big Bands.” The Round House was destroyed by Hurricane Carla in 1961. It was replaced with a smaller open-air pavilion in 1991 and is still a site for an occasional dance and receptions.

St. John’s Episcopal Church, a unique mission style structure, was first built in 1911 across the bay from Palacios in the community of Collegeport. After a series of natural disasters damaged Collegeport, the building was dismantled and hauled in pieces to Palacios, where it was reassembled and consecrated as St. John’s Mission in 1927. To this day the congregation continues to meet here for worship and education.

This home at 208 Main Street was built in 1915 by Joseph Pybus. It was later purchased by James L. Koerber, who served as Mayor of Palacios from 1948-52. The site was also home to a canning operation and a travel court, which provided space for military personnel and their families from Camp Hulen. This historic home is now the Main Inn Bed & Breakfast.

Originally built on East Bay Boulevard in 1903, this hotel was moved to its present site, 408 South Bay Boulevard, in 1905, where it was substantially enlarged to include the famous “Longest Front Porch in Texas.” Known as the Bay View Hotel and later the Palacios Hotel, it changed ownership many times and underwent many renovations before finally becoming “The Luther” in 1941.

Located at 317 East Bay Boulevard, this 1910 home was the residence of Martha Pearl Dickson McGuire, founder of the first private school in Palacios, with a curriculum that included cultural arts such as music and drama. The school building was located behind the family home, though some classes were taught in the home itself. Today this landmark is the Peaceful Pelican Bed & Breakfast.

Organized in 1907 and initially met in the Methodist Church Pioneer Hall.  The first church building was built in 1910, at a cost of $5,393. For many years church members have been active in promoting increased cooperation among the religious denominations in Palacios, as well as a commitment to improving multicultural relations in the community.

Located at 110 First St, the first summer encampment on the site was established by the Texas Baptist Convention in 1906. Families arrived from across the state by wagon, buggy or train to participate in religious activities as well as camping, fishing, swimming, boat rides and more. Numerous camps are still held at the Baptist Encampment every year.

Camp Palacios was established in 1925 as a summer camp for the 36th Infantry of the Texas National Guard. In World War II it was leased to the U.S. War Department and became an anti-aircraft artillery training facility. At its peak capacity, it was home to nearly 15,000 service members, as well as a number of German prisoners of war.

Located on 12th Street, near the western edge of Palacios, the cemetery dates back to the very earliest days of the city. Graves are marked with many different styles of monuments, from plain crosses to stone angels. The grounds feature a veterans monument with the remains of those who served in six wars, as well as stones marking the graves of Vietnamese refugees who settled in Palacios.

The first Methodist congregation in Palacios was organized n 1903, and parishioners met in a one-room schoolhouse until the construction of Pioneer Hall in 1905.  A sanctuary was added in 1912, and the church was soon offering many new programs, such as a choir and youth group. Though Hurricane Carla severely damaged the church in 1961, it has continued to grow and expand with new buildings and new community services.

Nature
Recreation
History
Around Town
Our Heritage
Share This